WHAT IS THE TAIKO CONNECTION? 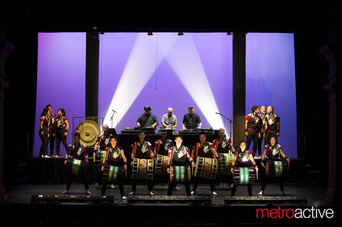 San Jose Taiko collaboration with The Bangerz. Photo from Metroactive
The Taiko Connection is about realizing the connection between the art of the taiko drum and the media of the modern world. This website is for those who are taiko players and enthusiasts, those who have little knowledge of taiko, and those who do not know what a taiko drum is. This site can also be very helpful for aspiring musicians and composers seeking to extend their range in composition tools through taiko. This poses a question: why would anyone come here if they have no interest in taiko?

The answer is in music. Music can be a very powerful tool used to connect people of different cultures and lifestyles together. Taiko is instrument that is slowly becoming integrated into the present day where we can hear and feel the powerful beats of the drum without even knowing it. The drums resonate within songs in the Top 40, but they also convey intense moments in soundtracks. Pop music and movies are two forms of media that are ubiquitous in today's modern world, and this 'centuries-old' instrument of the taiko is gradually making an appearance in the music we appreciate everyday, ranging from the soundtracks to the Lord of the Rings trilogy films to the rock band 30 Seconds to Mars in their most recent album.

This website will focus on primarily on the genres of music that taiko has appeared in, addressing orchestral music used predominantly in scores for filmed media, pop music on the airwaves, and also the use of the taiko within "world music." The site will also go into a very brief history of the taiko and how it has made its way to the United States and in the ways music has had a profound effect on taiko within North America, leading into the genres that taiko has found itself in today. Alongside the history of the taiko, the various styles and types of taiko will be addressed, providing descriptions on their use within the taiko world as well as their viability as musical instruments in today's musical compositions.

The ideal goal of this website is to create a greater sense of appreciation for taiko both inside and outside the traditional realms that the instrument appears in and will perhaps inspire both old and new taiko players, as well as musicians and composers to expand their range of creativity with music.
Powered by