the taiko connection
the beat of an ancient drum in today's media
Popular music can be defined as music that appeals to a wide audience and appeal, a relationship with the media outlets, methods of dispersion, and association and interaction with (groups of) people. This concept of Pop music is an ethnomusicological concept that is constantly being defined and tweaked to fit the standards of today's evolving music industry. [1] With this context in mind, Pop music can encapsulate a wide range of genres: Rock, Hip-hop, R n' B, Pop (as defined by the music industry), Soul, Electronica (which can further be broken down into various genres and sub-genres) Indie, etc. Examples of taiko's inclusion will cover many different genres that lie within this category of Pop music.

This section will mainly touch upon taiko's appearances in live performances focusing on their role in the performance. 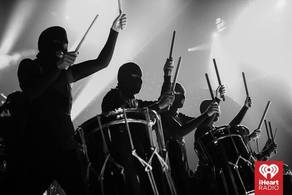 TAIKOPROJECT with 30 Seconds to Mars. Photo: iHeartRadio
Taiko within the world of popular music is vastly different than that of either world or soundtrack (orchestral) music as there are many new elements that are introduced within the popular music. In the two aforementioned genres, a large portion of the music focuses on the instruments and their melodic lines acting as either the entire content of the piece or supporting vocals. In popular music, the focus is slightly shifted away from the instruments and directed more towards the lead vocalist.

Popular music is also a very visual performance art where many fans will support artists simply to be in the presence of them firsthand. With this in mind, taiko is similar to its roots in kumidaiko where the visual element is equally as important as the musical content of the piece; hence, there is less emphasis on the rhythms of the taiko but a larger emphasis on the motions and movements that accompany the song in which they are featured in.

In Love Lockdown, the taiko drums play at very specific points within the song, particularly within the chorus. The rhythm of the taiko is very simple and is repeated throughout the entire chorus; it is the only incorporation of the taiko within the performance.

There are a few things to touch on in this song: the taiko greatly add to the overall sound of the song by providing a very loud and powerful sound to accompany Kanye's voice during the chorus. It can be seen that there are two sections of taiko players, those playing a fast horsebeat pattern  and the others playing very few hits but with extensions in their arms at certain points to accentuate the players and the rigidity of the song.  A closer look at the taiko players reveals that they are not wearing traditional attire for kumidaiko but are in costume to accompany the mood of the song.

TAIKOPROJECT is known for having collaborated with many world-renowned artists and even featured in commercials . Their involvement with 30 Seconds to Mars is similar to Kanye West's "Love Lockdown" in that their rhythms are fairly simple yet there is a very strong reliance in the visual element where the taiko players wear ski masks to cover their face, contributing to the theme of the piece.

Within the live performance, the taiko can barely be heard over the intense volume of the band's instruments. The taiko also plays the same rhythms as the drumset, acting as sound reinforcement rather than standing out in a percussive sense. The one moment where the taiko shines in this song is at the 6:30 mark. Though it cannot be audibly heard in the live performance, it is very present within the radio edit as the powerful raw sound of the taiko can be heard over the sounds of the drumkit.

It can be important to take note of the appearance of taiko within the music video, though very brief, the inclusion can be significant in that artists see value in the aesthetics of taiko enough to feature them in popular media and not just for its sound. It may only take one viewer's curiosity of the taiko to spark a new wave of support of the instrument.

Electronic music is very unique in that there is very little visual elements on stage. The music is the highlight of the genre, often not including any live performances, so the collaboration of San Jose Taiko with the Bangerz has opened the doors for a wide array of creative freedom. As electronic music has a solid foundation in prevalent bass, the taiko are a perfect complement to this as they provide another wall of bass towards the front of the audience. Taiko's long sustains can fill the space with a live sound that is not normally heard in electronic music concerts. In this sense, the taiko can act as the highlight of electronic music performances.

There is a strong emphasis on choreography in this performance, focusing on many of the conventional movements within a standard kumidaiko piece. Though the rhythms are simple, the movements and synchronicity of the performers greatly contribute to the performance as a whole introducing an entirely new element of performance to the electronic music scene.

Additional links, recordings, articles, and resources can be found in the Links page in both the "Useful Links" header as well as the "From Genres - Pop Music" header.
Powered by