the taiko connection
the beat of an ancient drum in today's media
It is important that this section be viewed first, providing a very good basis for what the taiko can sound like in both sampled and live mediums. With this in mind, we can proceed to other articles and musical examples that make use of the taiko by analyzing its sound as it appears within the music.

This section will address the use of orchestrated taiko and their incorporation of sounds. It is recommended that readers view this page first before other genres for a variety of reasons: there a good amount of evidence of taiko's inclusion into soundtrack and video scores, and due to this prevalence, the sounds of recorded taiko can be discussed and applied to later sections in the website. Videos and articles of popular examples in film scores and music will be used to support this claim. 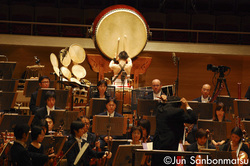 Eitetsu Hayashi at Great Encounters. Photo: Jun Sabonmatsu
The role of the taiko within orchestral music and soundtracks are often used to strengthen the percussion section during very intense moments within the music. Due to the taiko's relatively large size and natural resonance, they are able to provide low-end frequencies with a fair amount of attack (one can consider attack as the initial impact of sound, or in this case the sound of the bachi hitting the taiko) and can bring life to percussion tracks in recordings that normal concert drums such as bass and timpani may not be able to provide.

Radium briefly describes their experience of working with live taiko and the challenges they face when trying to record the drums. The taiko have a very wide range of possible sounds and harmonics that are hard to capture at high volumes because of the overwhelming force emitted by the drum when played at standard volumes. The taiko sounds best when it is able to be fully realized, taking advantage of volume range and capturing the subtleties of the taiko in this way can prove very challenging. Radium does a very good job recording the taiko and compares their sampled taiko score to a live version of the score.

The sampled version sounds decent and the taiko samples are clear and present. But what is lost is the large amount of low end frequencies and sustain that the live drums have, greatly adding to the fullness of the recording. Within their recording studio, it may also be the case that they have set up microphones within the room to record additional 'natural' reverberations to contribute to the recording's fullness.

While the two articles above do not describe their process of composing the soundtrack for The Hunted, they touch on the history of KODO and their unique methods of training and performance. Though KODO themselves are rarely shown in the film, this can be considered the most notable example of taiko within soundtrack music. Regardless of the theme of the film, taiko serves as a pivotal role of telling emotion and aiding moments of storytelling. Not only are the taiko themselves the important instrument, but other periphery instruments within standard kumidaiko repertoire are utilized to capture the moments within the film.

From an analytic standpoint in relating taiko to other genres of music, the whole soundtrack can be referenced for the powerful sounds of the live taiko. In comparing the live taiko sounds from the Radium Audio example and The Hunted soundtrack, certain qualities can narrowed down to define what a taiko has the potential to sound like: large amounts of low end frequencies with sustain and a "dip" in the pitch of certain hits (as if the pitch slides down briefly for a moment - this is a characteristic of many types of drums but there is a slightly different sound quality to the taiko, also known as timbre ).

Many of the sounds heard in The Hunted will be seen in other film scores, as KODO utilized their entire wealth of equipment of many types of nagado taiko, odaiko, okedo, and shime taiko combining them all to give a very rich and full musical experience. In most other soundtracks, the use of taiko will be limited to nagado taiko, odaiko, and large okedo taiko because of their rich low tones and resonances. For example, an okedo taiko is used in the score to the upcoming film "The Hobbit: The Desolation of Smaug." It is important to take note that taiko is rarely a feature instrument, but it appears with other percussion ensembles reinforcing the beats found in the score amidst the various other sounds of instruments, voices, and sound effects.

The sound of the taiko is very prominent within the soundtrack of Crouching Tiger, Hidden Dragon. One sound in particular has not yet been addressed until now. The percussive sound of the rim of the taiko also known as ka. The use of the ka goes on throughout the piece, however as the taiko gets louder so does the discernible sound of the ka. The ka can be definitively heard around the 0:50 mark but begins to increase to full volume a minute later.

The unique sound of the ka can be attributed to solid wood construction of the taiko with heads on both sides of the drum. This construction allows the sound of the ka to resonate and vibrate within the body of the taiko before it is heard, creating a very full (or hollow) quality to it. The ka can be considered to be one of the most discernible qualities of the taiko within other genres of music as their high volume and fast attack pierce through many frequencies of other instruments.

Additional links, articles, audio, and videos about taiko in soundtrack music can be found on the Links page. Use the knowledge gained from this page, Pop Music, and World Music to help you discern where taiko appears in music but also to gain a deeper appreciation for this traditional instrument.
to pop music ->
Powered by