the taiko connection
the beat of an ancient drum in today's media
There are many different types of taiko, each with their own unique function within the world of kumidaiko visually and aurally. The drums all have different unique sounds and pitches that are used for a variety of combination of sounds in a piece. This section will address the general dimensions of a taiko, its uses within a kumidaiko ensemble, and a possible recording detailing how a drum might be used within traditional and non-traditional performances.

There are two different types of taiko drums, differing in the construction of the drum itself. Byou-uchi taiko are typically made out of a single tree trunk hollowed to form the drum body while using tacks to nail the stretched hide to the drum securing, it in place, resulting in a fixed pitch depending on how much that particular drum head is stretched. These are the most recognizable taiko with a very deep and resonating sound. 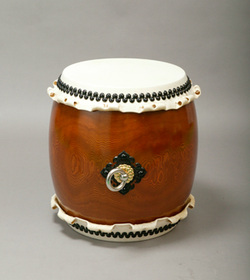 Nagado daiko. Photo from: Asano Taiko
Nagado taiko are the most common form of taiko seen in kumidaiko in North America. They can be considered the vocals in a standard rock band arrangement. Nagado taiko have a variety of sizes, ranging from a diameter of 30cm up to 75cm (11.8 inches - 29.5 inches). These dimensions are based off of Japanese units of measurement: Shaku and Sun. The nagado taiko is very flexible in regards to the way in which the taiko may be utilized: being able to be positioned at different angles, leading to different stances that have both musical and aesthetic function.

Within a kumidaiko group the nagado taiko is often utilized as the main drum acting as the "melodic line" of the piece. This is also credited to their incredible flexibility in their different styles: Slant (Sukeroku/Naname) style, or Down (Flat/Beta) style are the two most common forms of playing nagado taiko however there are other styles in which a nagado taiko is used.

Within non-traditional means, the nagado taiko is one of the most viable types of taiko to include in both live and recorded performances for a number of reasons: portability, has a deep resonant sound that adds to the bass of a piece, the rim sound (Ka) of the taiko is another percussive element that can be used to reinforce woodblock like sounds. A group of nagado taiko can greatly contribute to the lower frequency register range of a piece as well as add depth in the complexity of the percussion section because the taiko is a tuned instrument, meaning that it has more distinct harmonics than other percussive instruments. 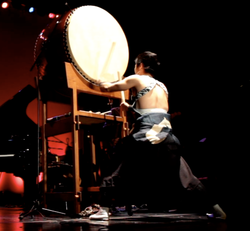 Odaiko by Takuya Taniguchi. Photo: Walter Lang
The Odaiko, translated literally from Japanese means "Big Drum" with a size much larger than that of a nagado taiko. Dimensions of Odaiko can typically range from 90cm-120cm (35 inches - 48 inches) though there have been much larger Odaiko created in existence typically for ceremonial purposes. The odaiko is played horizontally on an elevated stand, the height of the stand is a variable length but normally ranges 114cm-156cm (45 inches - 61 inches), allowing two players to play the odaiko at the same time.

The large size of the Odaiko creates a very powerful, deep, resonating sound that can greatly add to a kumidaiko ensemble. In standard kumidaiko performances, the Odaiko plays both the role of accompaniment and as a soloist. Rhythms on the Odaiko are more simple than that of the nagado taiko, but the hits and sound of the odaiko are of greater intensity; perfect for the lowest frequencies desired in kumidaiko as well as a piercing resonant rumble within other genres.

The odaiko is a very large instrument, and as a result it is very hard to transport and move on a stage. Thus, the integration of Odaiko in live performances is limited by the many elements surrounding live performing situations. However, the aesthetic of the Odaiko with the resonating low frequencies are very valuable to live performances that often have problems of fast decay of the lower frequencies. Within recorded media, the Odaiko is very similar to nagado taiko where both types of taiko can be used in the recording. 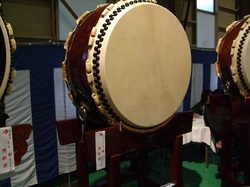 Hira daiko on upright stand. Photo by: Raion Taiko
The Hira daiko, translates roughly from Japanese to "Gong taiko" in that both the sound and shape of the Hira resemble a gong. The hira daiko can be a wide range of dimensions, encapsulating both the dimensions of the nagado and odaiko. Therefore, the Hira is a very flexible taiko in performance; however, Hira daiko are very rare in standard kumidaiko groups as it is uncommon and can be expensive to purchase. The Hira can be played the same way as nagado taiko but is more typically seen similar to an odaiko, upright and horizontal.

The Hira daiko is not a very viable instrument in live performances due to the instrument being uncommon in many taiko groups but also in the specific equipment needed to properly use the Hira daiko: specific stands crafted for each individual style of Hira play. However, the unique sound quality that the Hira can provide may be valuable to certain percussion sections within pieces.

The other type of taiko are tightened not through stretching the head over the drum and tacking the skin to create a fixed pitch, but rather these taiko are tightened with rope and therefore have adjustable pitches. The shime daiko class can be broken down into two different types: tsukeshime daiko (often shortened to just Shime) and Okedo taiko. Okedo taiko differ in their construction than tsukeshime taiko and as a result they can often be considered a completely different type of taiko outside of the classification of shime taiko. The shime and okedo taiko have a wide variety of uses and are very popular in today's modern kumidaiko scene. 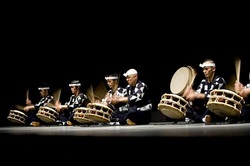 Shime taiko. Photo by: DonFrance-photos
The shime daiko can be considered the snare drum of the kumidaiko ensemble. It is often considered the time keeper, the constant rhythm that keeps the entire ensemble in time. The higher pitch of the shime allows the sound to cut through the lower frequencies of the nagado and odaiko allowing it to be heard over the loud beats of the drums. The shime is essential in kumidaiko and can be considered the most important drum out of all taiko in its versatility as a solo melodic instrument with intricate rhythms as well as the ability to keep time.

Shime daiko come in a variety of dimensions but they typically range from a diameter of 35cm - 39cm (13 inches - 15 inches) and a height of 15cm - 24cm (6 inches - 9.5 inches). These varying degrees of diameter and height can create an array of pitches that the shime can achieve, adding a potential layer of harmony to the ensemble.

The shime daiko are very versatile, functioning as both an accompaniment instrument as well as a melodic instrument due to the  ability to control the pitch of the shime through rope tightening. Pieces specifically featuring groups of shime tuned to different pitches have been written adding depth to the musicality of taiko pieces with harmonic and rhythmic complexity. Within a non-traditional format, the shime daiko does not have as much depth as the larger nagado taiko, however the shime has potential to be used in conjunction with drum sets providing an addition to snare and tom drums in a percussion environment. 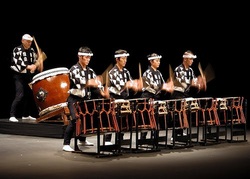 Okedo with shime and nagado taiko. Photo: DonFrance-photos
The Okedo taiko is a drum that is constructed out of staves of wood rather than one hollowed out piece of wood, allowing for a lighter drum. The original Okedo taiko was large and mounted on a stand similar to the odaiko, played with specific bachi (drumsticks) that created a unique slapping sound. A version of Okedo was developed by a taiko professional Eitetsu Hayashi that adapted the okedo to be played like a nagado taiko yet retaining the same sound of the larger okedo. A mobile version of the nagado-style okedo was created, allowing the player to play on both sides of the okedo at the same time.

The Eitetsu-style okedo taiko is a very portable taiko, taking up the same amount of space as a nagado taiko yet at a fraction of the weight. The sound of okedo taiko do not have the resonance that a nagado can create, but their sound can greatly contribute to a taiko ensemble. The okedo can function as both a nagado taiko and a shime taiko, allowing for "drumset" combinations of taiko to create different combinations of sounds with one player. The possibilities created by having okedo taiko in a kumidaiko ensemble are almost limitless.
Powered by